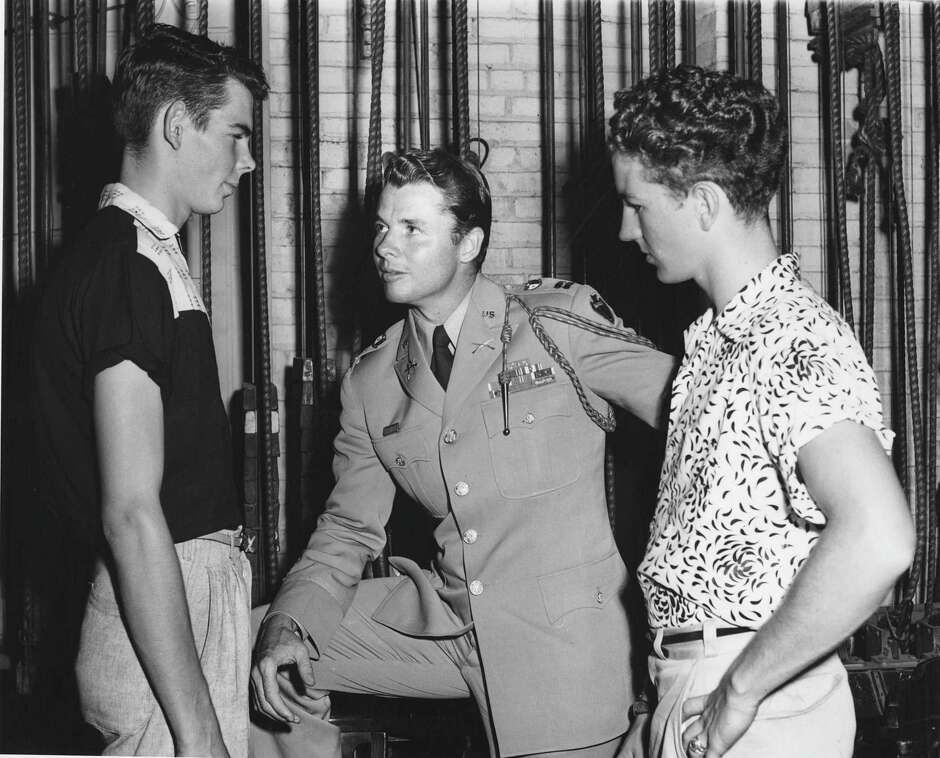 World War II hero and movie star Audie Murphy (center) talks with two unidentified youths during his August 1955 visit to San Antonio to promote the military and his new movie, “To Hell and Back,” based on his autobiography. The 32 young men involved in the mock enlistment ceremony, who were “sworn in” by Murphy, had not yet received their uniforms.

Photo: courtesy /
Base realignments notwithstanding, San Antonio is still Military City … and still a bit of a small town within that distinction.After a Feb. 11 column was published with Raul Soto’s question about photographs of an Army recruitment ceremony he took part in, Aug. 17, 1955, at the Majestic Theater, others who stood onstage with him contacted each other, Soto and this column.It was a mock enlistment, says Lonnie Murdock of Marion, one of 32 recruits who were welcomed into the Army by Audie Murphy — star of the movie, “To Hell and Back,” that was premiering that day, World War II hero and by then, Texas National Guard officer stationed at Fort Hood. “Because he was in the Guard, he couldn’t swear us in.” That had been taken care of earlier by a Marine Corps captain at San Antonio’s recruiting station. The ceremony at the Majestic was one of three personal appearances the native Texan made that day to promote his movie, based on his autobiography of the same title.

The brand-new soldiers had enlisted in their home towns — for Murdock, that was Alice. He boarded a bus with a friend, Billy Jacobs, and met young men “from other little towns” and from as far away as Corpus Christi.

“When we got up there (to San Antonio), we were sworn in and told we were going to be in the Audie Murphy platoon,” Murdock said. “They wanted us onstage to give (Murphy) something to do.”

“We were told we were going to a free movie,” says Gilberto Sanchez of Live Oak, who came from New Braunfels at the time. “No popcorn, though.”

They were all still in their civilian clothes “with the rolled-up sleeves and the flat-top haircuts.” Talking about himself and his fellow raw recruits, Murdock said, “(we) were right out of high school and had been just running the streets. We didn’t know anything about marching, we were just learning the (military) jargon they were teaching us.” To make sure the ceremony went off without a hitch, the new platoon had to practice the ceremony “over and over again.”

There might have been at least a hiccup or two, Sanchez recalled. When the recruits recited the Pledge of Allegiance, he saimd some got mixed up and pledged to “the United States Army” instead of “the United States of America.” Murphy walked through the rows of new soldiers, asked them their names and shook hands. “I told him my name was Gilberto, and he said, ‘Good luck, Bert!’”

Another highlight was an appearance by June Prichard, Miss Texas 1955. “She gave us each a little peck on the cheek,” Murdock said. “We were 17 or 18 years old and thought that was really something.”

Although the newcomers didn’t spend much time with the much-decorated combat veteran, Murphy made a good impression on them.

“For all he went through during the war, he was surprisingly kind and gentle,” Murdock said. “He was an amazing man. I met Elvis Presley, too, but it was nothing like meeting Audie Murphy.”

After their glamorous moment onstage, the Audie Murphy platoon were loaded on a bus and went to Fort Chaffee, near Fort Smith, Arkansas. They did their basic training together at Fort Knox in Kentucky and eventually shipped out on an old Merchant Marine ship bound for Bremerhaven, Germany.

Both Murdock and Sanchez went on to long, successful military careers. Murdock retired after 26 years from Fort Sam Houston where he was a master sergeant in the Directorate of Personnel and Community Affairs. Sanchez did 20 years, attended radio repair school and rose to the rank of staff sergeant. After retirement from the Army, he became a technician for Motorola for another 25 years. Over the years since that onstage ceremony, the two men have bumped into one another in a barbershop in Germany and commissaries here. They’re considering organizing a reunion of the Audie Murphy platoon and promise to share pictures.

Another reader wrote to say what he’d gotten out of another showing of “To Hell and Back.” Having seen it, writes George Pride, “I was convinced the Army was for me.” Pride joined in January 1956, and was assigned to the 82nd Airborne Division at Fort Bragg. “The Korean War was over, and the Vietnam War had not yet begun,” he says. In 1965, he used his GI Bill benefits “to gain my advanced pilot ratings, which eventually qualified me to lead the Drug Enforcement Agency aircraft program.” While in Washington, D.C., “I also purchased a home with the GI Bill benefits. All of this began upon seeing the movie with Audie Murphy.”

Army veteran Roberto S. DeLeon saw Murphy’s visit from a different perspective but with a similar outcome. He was 8, and his brother was 9 when their mother took them to see the Davy Crockett’s birthday/Audie Murphy Day parade where the soldier-turned-movie-star served as grand marshal. The boys sat on the curb on Houston Street in front of the Majestic.

“Being ‘Army brats,’” DeLeon writes, “we knew the story of Audie and the proper protocol in rendering a salute. Well, here he came, riding a white horse with a black saddle with lots of silverwork inlays, wearing his full Army uniform and a chrome helmet, his sidearm and his Medal of Honor.

“We stood and gave him a hand salute. He saw us and guided his horse closer and reined in the horse that reared up. Then Audie Murphy returned our salute. I made eye contact with him, and it was like a bolt of lightning hitting me. I knew then I would join the Army after finishing high school.”

After the parade, the boys went to the movie premiere, and again saw Audie, who made a short speech about his experience in the war. Ten years later, DeLeon says, “immediately after graduation, I joined the Army,” serving in Vietnam and Washington, D.C. Later, he joined the Army Reserve and stayed an additional 25 years.

“I have never regretted my time in the services and the challenges it took me through,” he says. “I know that seeing Audie Murphy in person and hearing his remarks was a big influence in my life.” 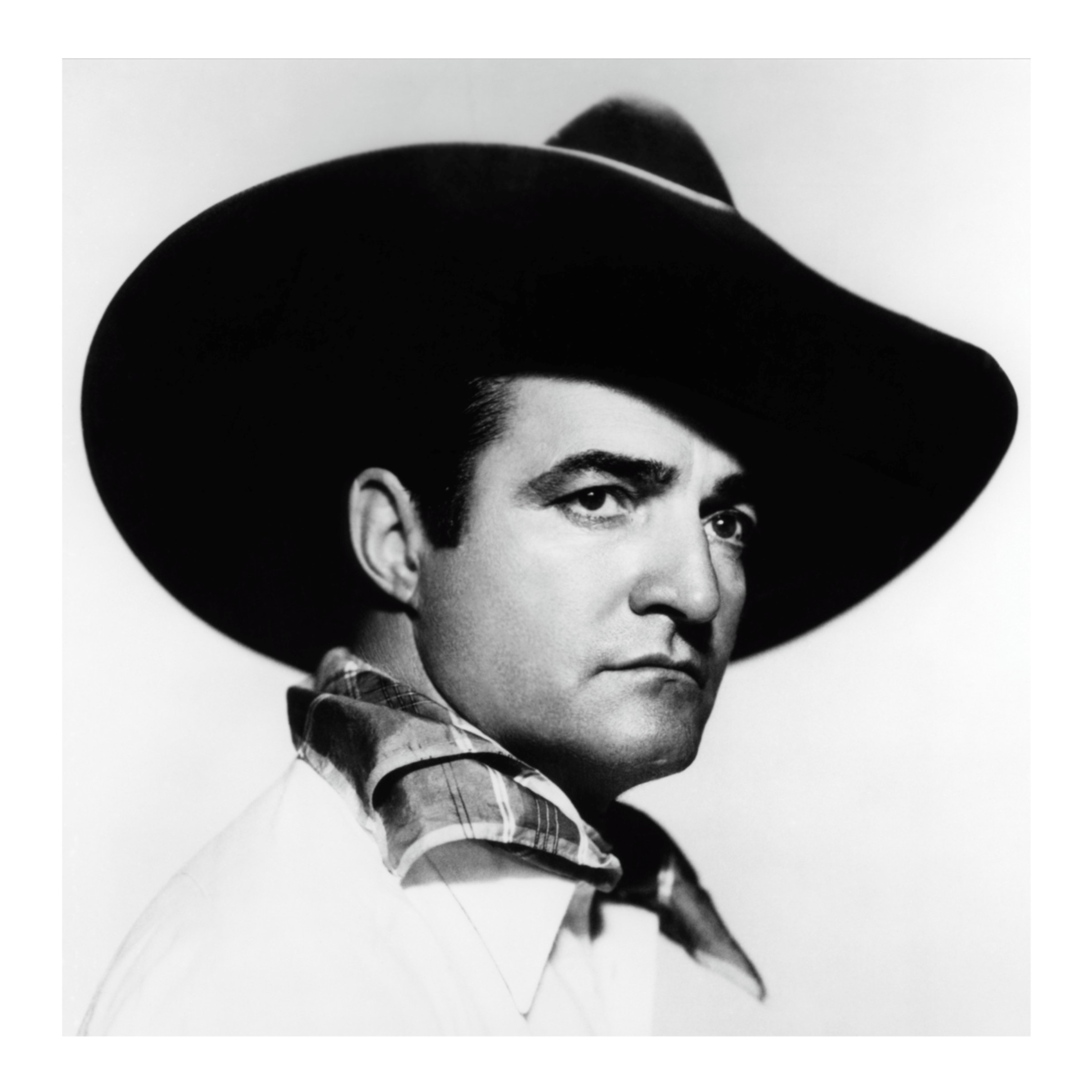